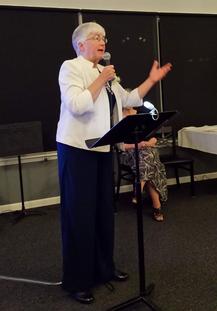 The Ashtabula County Choral Music Society was created in 1989 by a committee of individuals representing choral music performance in schools, churches and community choruses from throughout the county. The goal was to draw experienced county singers together for the performance of large choral works two or three times a season. The first performance was in 1990.

The formal organization developed over the next five years with the creation of a Constitution and By-Laws, development of a Board of Directors, identification of staff positions, establishment of a funding process, and receipt of non-profit status and incorporation.

For several years the Messiah Chorus tradition of providing annual performances of Handel’s masterpiece was maintained as one event in the ACCMS season.

A program of choral education with performance opportunities for children and youth began in 1997 with the first Choir Camp and the creation of the Children’s Choir. A Youth Choir performed 2000-2015. In addition, Ashtabula All-County Honor Choir festivals for both Junior and Senior High Schools were sponsored.

In 2015 the ACCMS developed and supported Keys, Pipes and Voices, a 3 day collaboration with Jared Jacobson. For the Keys portion of the Mr. Jacobson, a gifted organist and accomplished music director provided feedback to local piano students about their recital pieces to support their development as musicians. The Mighty Kimball theater at Lakeside Performing Arts Center was the instrument used to present an organ recital which illustrated both the talent of Mr. Jacobsen and the capabilities of the organ. The Chorale then was directed by Mr. Jacobsen during the choral music concert. This collaboration continued through the spring of 2019 until his death in the summer of 2019.

A current Artistic Director for ACCMS was hired after the retirement of Founding Artistic Director Kathleen Milford in 2019. The first concert with Paul Shellhammer, III was in December of 2019. Further performances of the group were limited during the COVID pandemic restrictions. Performances resumed in May 2022 with a concert entitled Emergence: Remembrance, Reflection and Renewal.